It seems to be a glorious time for female superheroes. After 11 years and TWENTY feature films, Marvel finally released a story about a titular female hero, Captain Marvel. On the DC side, it only took 4 years and 3 films to put out Wonder Woman in the DC Extended Universe franchise. Marvel’s Phase Four plan includes a Black Widow film, and Thor: Love and Thunder, which will feature Natalie Portman as the new Thor. 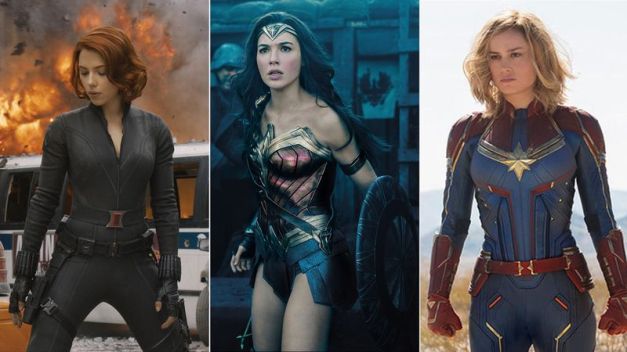 It’s great that we’re seeing more women in starring roles, but we’re really only seeing one kind of woman: white, (that’s for another post) model-thin, leggy, and beautiful. It would be easy (if not intellectually lazy) to argue that these body styles are dictated by the pages of the comic book. But since we are talking about fantastical beings with superpowers, I don’t think that argument holds much weight.

A week or so ago, I came across a fantastic opinion piece in the Chicago tribune by Naomi Darom: The sexist demand on female superheroes: Save the world and look hot. Many a word has been written about the aesthetics of female superheroes, but this piece got to the crux of this feminist paradox:

This is female empowerment, filtered through the male gaze.

It is really rather odd. We’re constantly told, by stars and studios, that these movies are about breaking barriers, empowering women, increasing diversity. Yet why are superheroines today allowed personalities, professional lives, cool gadgets, lassos of truth and sassy comebacks, but not rolls of fat, pimples or big noses?

Darom goes on to say how for many, many years, “beauty was the only superpower a woman had.” Discrimination in employment, property ownership, and pretty much everything else in life kept women from attaining any goals outside marriage. Spinsterhood was a very real “threat” for a young woman if she couldn’t ensnare a man to marry.

“…folded inside every contemporary superwoman is the ultimate female superpower: Her legs are long, her abs are taut, her cheekbones exquisite. It seems that we have replaced one set of impossible standards (be pretty and helpless) with another (deflect bullets and also have a killer body).”

Will we ever see everyday, average women portrayed in film as heroes? As long as men continue to write the scripts, sit in the director’s chair, and run the production companies that greenlight films, probably not.

In Avengers: Endgame we saw a depressed and obese Thor still kick ass. Surely a size 8 (or above) woman is worthy of the superhero treatment.